Applying Finish with or Across the Grain | Apollo Sprayers HVLP

Applying Finish with or Across the Grain

It’s common to be instructed to apply a finish in the direction of the grain, called “with the grain.” Doing this is usually best when brushing a finish, but it’s rarely necessary when wiping or spraying a finish.

There are exceptions, however. These include solid or veneer with their grain running in different directions – for example, sunburst, parquetry, etc. If the grain of the boards or veneer runs in the same direction, it’s always best to brush with the grain.

Spraying, and wiping on and wiping off, are different. With spraying, as long as you build the finish enough so there aren’t dry streaks or areas with too little finish, it doesn’t make any difference in which direction you spray. 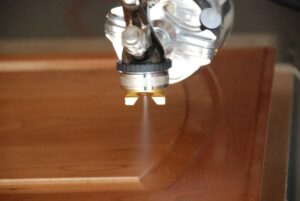 For example, you might find it easier to spray horizontally on installed vertical panels rather than turn the air nozzle 90 degrees and spraying up and down.  In fact, in many spray applications it is advantageous to spray in both directions, often called “cross hatching”.  In this case you would spray with the grain and then apply another wet coat on top against the grain.  This is particularly useful when applying a finish with uneven surfaces like on raised panel doors for instance.

With wiping, as long as you wipe off all the excess, it doesn’t matter in which direction you wipe on the stain or finish. The only consideration is in wiping off. If there is any chance that you may leave streaks, because you don’t get all the excess wiped off, you should wipe off with the grain.

By signing up, you'll receive exclusive pro tips, news and other subscribe-worthy incentives.

You have Successfully Subscribed!

By submitting this form, you are consenting to receive marketing emails from: Apollo Sprayers International, Inc. You can revoke your consent to receive emails at any time by using the SafeUnsubscribe® link, found at the bottom of every email. Emails are serviced by Constant Contact